MY VISIT AT THE MET – The Age of Gods

When I am missing Greece so much, or when meeting friends, or when I am having the blues,  I always go to the Metropolitan Museum – the Greek and Roman Galleries to be more specific. Picture Audrey Hepburn in the movie Breakfast at Tiffany’s.  The Met is my “go to” place – I feel at home. It is one of my favorite places to be. Instant transformation into another era: The Age of Gods. Thank God I live in New York City blocks away. Talking about God, on my recent visit last Sunday, looking up, admiring the divinity of this magnificent building and the beautiful architecture, walking up the stairs, feeling mesmerized and full of anticipation I discovered … a Greek Goddess.

THE METROPOLITAN MUSEUM OF ART Images below 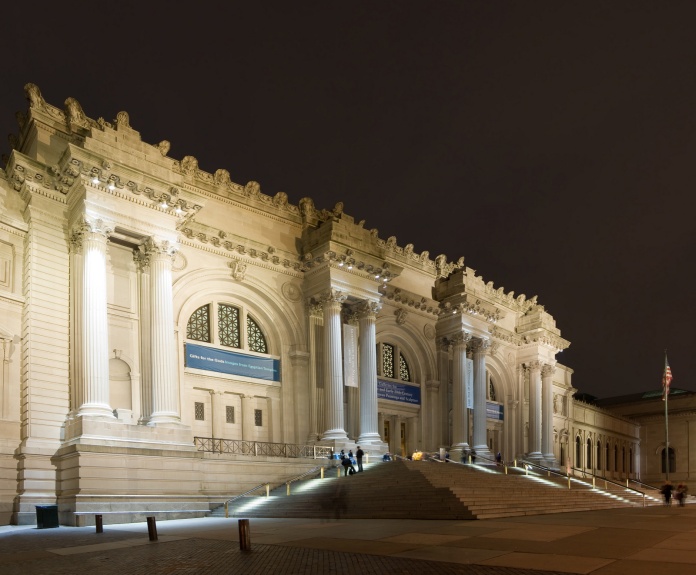 The magnificent Museum’s Beaux-Arts  Fifth Avenue (82nd Street) facade and Great Hall, designed by the architect and founding Museum Trustee Richard Morris Hunt, opened to the public in December 1902. The Evening Post reported that at last New York had a neoclassical palace of art, “one of the finest in the world, and the only public building in recent years which approaches the dignity and grandeur of the museums of the old world.”

In 2006, the Museum’s facade received a face lift (had a little work done, which took 4 years and $12.2 million to complete) and all the structural elements were restored as near as possible to their original 1902 grace. I was amazed with the perfection! 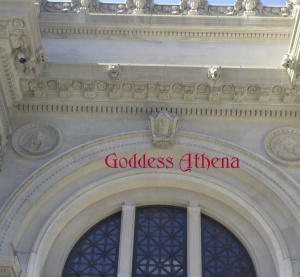 Looking up right front and center, at the very top arch of the main entrance was a beautiful Grecian helmeted face – the same figure was at the top of the identical entries on the left and right. Who is this beautiful figure I wondered? It must have some kind of significance — otherwise it wouldn’t be there gazing in such a prominent, peacefully superior manner at New York’s Fifth Avenue and the millions of people entering the Museum through the years. I was captivated! I asked around, did some research, and I discovered she is The Greek Goddess Athena.  No wonder I felt the Greek hospitality every time I was visiting. No wonder I felt I was going home. No wonder I was drawn back again and again… 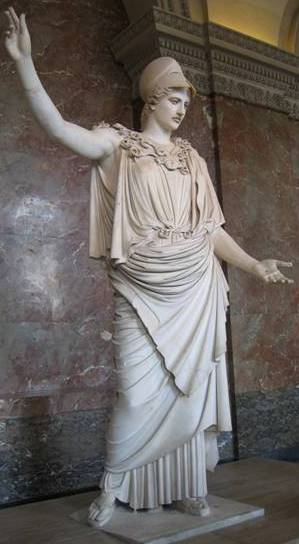 The architect, Mr. Richard Morris Hunt, mentioned above was inspired by a copy of the original bronze statue of Athena which today can be seen at The Louvre Museum in Paris – the name of this statute is called Athena of Velletri. Several copies were made by the Romans and this one was found at the Villa of Velletri in Italy. It is a copy of the original Greek bronze possibly created in 430 BC by Kresilas.

Image left:   Athena of Velletri at the Louvre  – Roman marble copy around 100 AD

Ancient Greek Goddess Athena was the mythological goddess  of wisdom, but also the poetic symbol of reason and purity. Goddess Athena was very important to the Greeks, since they named her the Iliad’s goddess of fight, the warrior-defender, the protector of civilized life and the artisan [spinning, weaving, gold crafting] activities. More specifically, she was the goddess of civilization and the more disciplined side of war choosing to win wars with effective strategies and not blood lust and violence. Athena often appears to be helmeted and armed and with a shield bearing the Gorgon Medusa’s head. This armed warrior goddess appears in Greek mythology as the helper of many heroes, including Heracles, Jason and Odysseus. She had never a consort or a lover, and thus often was  known as Athena Parthenos (“Athena the Virgin”), hence her most famous temple, The Parthenon on the Acropolis in Athens.

Goddess Athena gave the name to the city of Athens. The patron deity of the city of Athens she was the creator of the olive tree and desire of peace. She was admired and worshiped all over Greece, but her timeless home has always been Athens.  According to  ancient Greek myths and legends, she won in the competition with the God Poseidon over the patronage of the city state of Athens. Poseidon hit the ground with his trident and running water came out, while Athena offered an olive tree as a symbol of peace and prosperity.

Creator of peace, justice, wisdom and  prosperity, guardian of cities, and protector of the arts these are the characteristics of Goddess Athena – this is what she is offering us here with her eternal presence at the top of the grand entrance of New York City’s Metropolitan Museum of Art. We are so blessed and honored with her divine presence and divine inspiration for attaining peace and prosperity ourselves. During these challenging times we can all be inspired  — and we are!

Images below: Greek and Roman Galleries recently renovated at the Met. 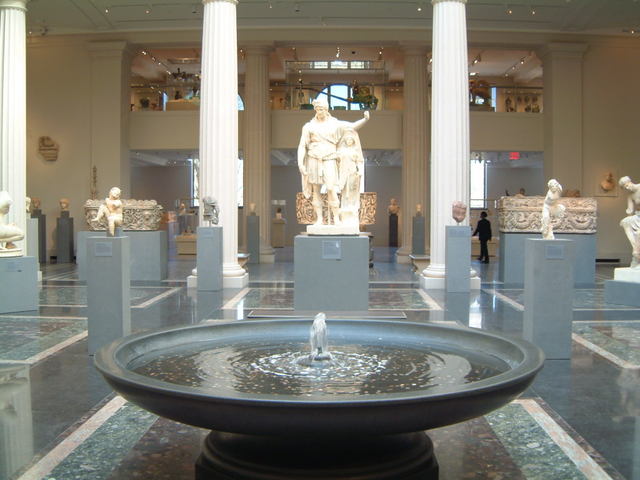 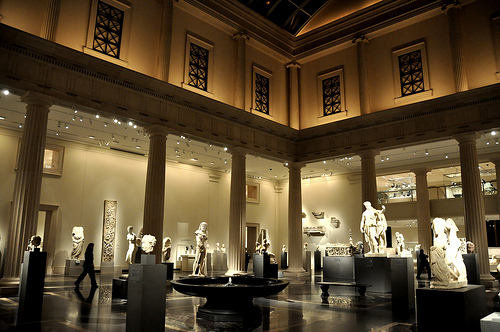