STEVE MCQUEEN and THE GREAT ESCAPE

“He is a misunderstood bad boy you’re sure you can cure with a little warmth and some home cooking.” Faye Dunaway

“He is a beautiful, beautiful man.” Jaqueline Bisset

“Racing is life…everything before and after is just waiting.” Steve McQueen

I know, I know…I promised on my last post that I will continue with more stories about Greek god Apollo, but, something came up while I was doing research about my new Fall’12 Men’s collection – another Apollo, Steve

McQueen. OK, he is not a Greek god, but a modern-day cinematic demi-god and a Hollywood legend. He is up there, as far as I am concerned with all the rest of the gods and demi-gods, Apollo, Alexander, Hermes, Achilles, Paul (as in Greek god Paul Newman), and the modern-day “God of Cool” James Dean. I am fascinated… 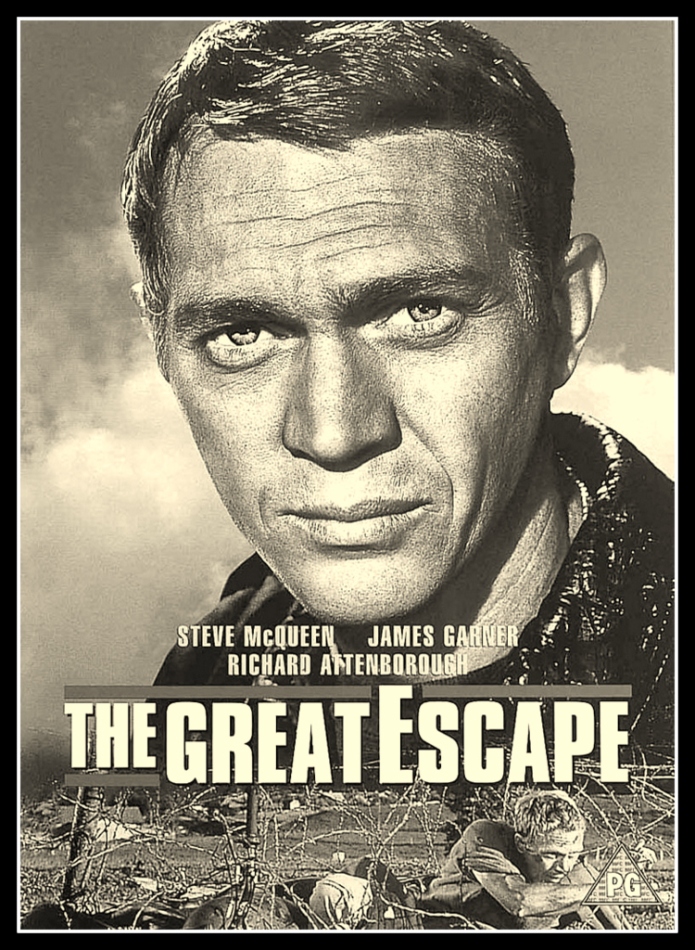 Well, Apollo and more stories about him will be next, but for now, let’s go back to Steve McQueen. I don’t know, there was something about a man on a motorcycle with “Apollo-like” looks (blond, blue-eyes, fearless  and very beautiful), barb wires, and action that got me interested. A modern-day warrior.

“I live for myself and I answer to nobody.” Steve McQueen

What a sexy man! He is known as the “King of Cool” and one of the sexiest man ever. You must see him in the film “The Great Escape” -this is where I got inspired. The wires, the motorcycle the adventure! Well, I can’t wait to show you my next men’s collection – very cool…

“When I believe something, I fight like hell for it.” Steve McQueen

“My life was screwed up before I was born.” Steve McQueen

The Fall ’12 Men’s group that I will design is called “Escape” and it is of course inspired by the action film “The Great Escape” (1963) where Steve McQueen is one of the imprisoned WWII officers who struggled to break out of a Nazi P.O.W. camp. It was in this film that the now legendary Steve McQueen defined  himself as a great American actor. You must watch. 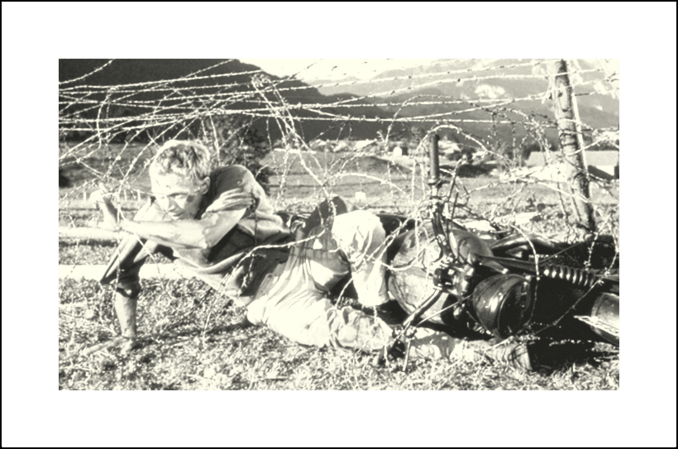 More stories about the “real deal” Greek God Apollo, and his love interests next.

“Nothing in excess” Apollo

APOLLO, one of the twelve deities of Olympus is the favorite son of god Zeus and Leto  – a Titan goddess who was impregnated by Zeus during one of his numerous love affairs. He is the twin brother of goddess Artemis. 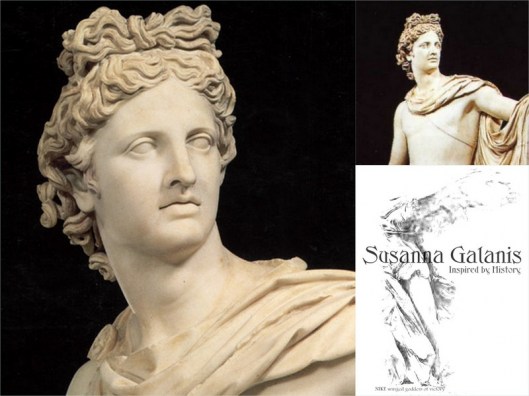 His main iconic identifiers are the laurel wreath around his head, the lyre, the bow, the sun and the chariot (which as the sun god, drives across the sky daily-according to the myths). God Apollo is usually described  as the “most Greek” of the Greek Gods because he is THE idealized form of KOUROS, a young man in perfected beauty and grace.

His story begins with his mother Leto and her attempt to give birth to him and Artemis. Hera ( the official wife of God Zeus), in her jealousy had pursued Leto relentlessly. Leto searched for a place where she could give birth to the children without Hera finding her. She convinced the island of Delos to be the home of Apollo, saying that a temple would be build there. Leto waited nine days and nights to give birth to Apollo, because due to Hera’s rage, Eilithyia, the goddess of childbirth, was not able to come to Leto’s aid. Finally Iris, the messenger goddess, was send to Hera, offering her a necklace fifteen feet long. Well, jewelrey always works (even back in the Ancient world of Greece ), Eilithya was able to come to Delos, and when she did, Leto gave birth to Apollo – full grown. Apollo immediately claimed, “The lyre and the curved bow are dear to me, and I shall prophesy to men the unerring will of Zeus” (according to Homeric Hymn to Apollo.

At the tender age of four days old, Apollo showed incredible talent in archery by killing the gigantic serpent named Python (at the city of Delphi) who had been harassing his mother during pregnancy (again, according to the myths and the legends.) When Goddess Hera found our that Zeus had had another affair, she send Python to follow Leto day and night so she could not have any peace to have her children.  The monstrous Python who was said to measure several acres in length was terrorizing the city and the citizens of Delphi were glad to be rid of of her and were grateful to Apollo – later Delphi was established as the center of Apollo’s worship.

Image above, Temple of Apollo at Delphi

Delphi was the first oracle of Greece and the district where it was located was considered the navel of the world at the time.

“Know thyself.” Apollo (written at the entrance at the Temple of Apollo at Delphi).

Following his dramatic debut with the Python, Apollo went on to become not only an unerring archer, but the best musician, poet, philosopher, law-maker and creator of legal institutions, a masterful physician, the god of prophecy and a great scholar who always spoke the truth. 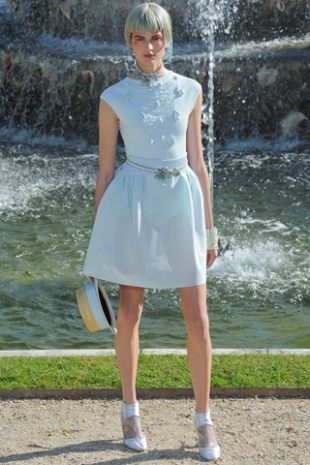 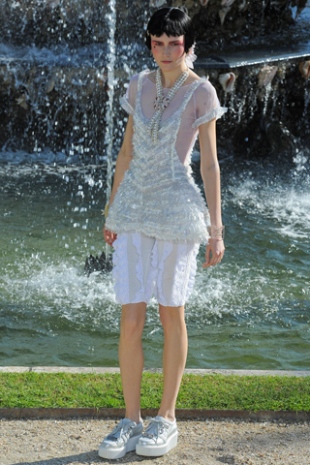 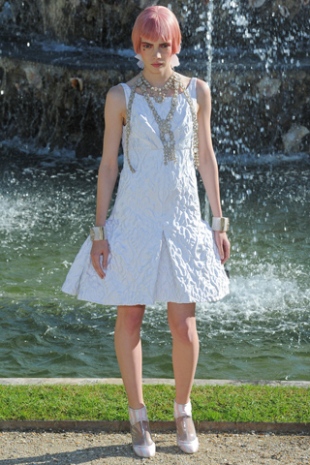 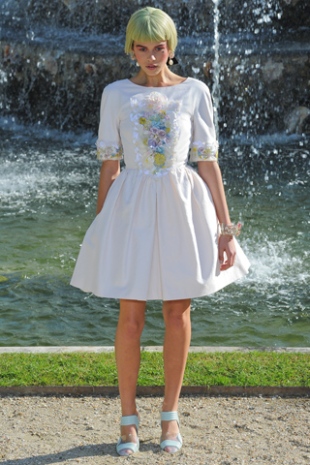 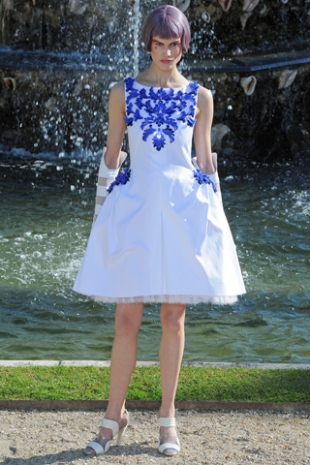 A POSTCARD – APOLLO the Greek God of Light, the favorite son of Zeus, the Archer, the Lawgiver, the God of Prophecy, and the original overachiever.